Think Positive
Nick re-recorded one of his songs, Think Positive, as a reminder to his fans to think postiive during the COVID-19 pandemic.

Heroes (2020)
Nick re-recorded another one of his hits! This time, it is in honor of the doctors and medical personnel that are working hard and risking their lives to keep us safe during the COVID-19 pandemic.

United By Music North America-Performance in Nashville
Check out this performance Nick did at Club 150 in Memphis! Nick is performing Peace Will Overcome by Ben Rice.

An Edmonds Kind of Day

Nick Baker wrote the theme song for the upcoming City of Edmonds 125th Anniversary celebration (August 2015).  It is performed here by Maplewood School third graders in March 2015 and the song is called "An Edmonds Kind of Day."

Nick Baker performing for an elementary school audience to promote his new children's book "Turtle" and do a sing-along with the kids related to the themes in his book.

Dynamite Limbo performing at Wild Vine Bistro in Bothell, WA, in March 2013.  Nick Baker is on keyboards and Chris Yates is on guitar.

Song was written in 1959 by Jerry Leiber and Mike Stoller, and originally performed by The Clovers.

Dynamite Limbo performing at Wild Vine Bistro in Bothell, WA on March 1, 2013.  Nick Baker is on keyboards and Chris Yates is on guitar.

Song was written and performed originally by Jim Croce in the 1970's. 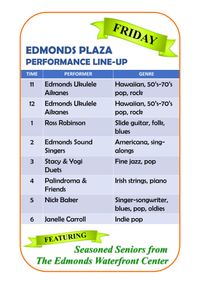 Nick will have the stage at the Edmonds Art Festival for an entire hour on June 17th! He will be performing his best hits and also selling his books and CDs. See you there!